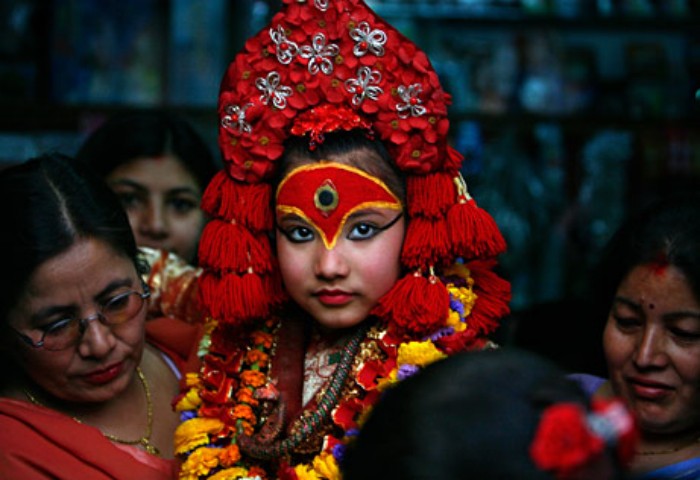 The rich cultural heritage of the Federal Democratic Republic of Nepal has evolved over centuries. This multidimensional cultural heritage encompass within itself cultural diversities of various ethnic, tribal, and social groups which is manifested in various forms such as music and dance, art and craft, folklore and folktales, languages and literature, philosophy and religion, festivals and celebrations, and foods and drinks.

Nepal, a landlocked country of South Asia, shares its borders with China and India. The population of Nepal mainly consist of Tibeto-Burmans from the north and Indo-Aryans from the south. This ethnic diversity and proximity to neighbouring giant cultures have also influenced its culture. Nepal, thus, has inherited several customs and cultural practices from the north (China and Tibet) as well as from the south (India), and over a period of time attuned the same to its own indigenous requirements based on its topography, resources and climate.

Nepal’s culture is greatly influenced by music, architecture, religion and literature. This is more evident from various architecturally rich temples, churches, monasteries and other religious buildings that are found in every corner of the country.

The population of Nepal is approximately 28.5 million, according to the World Bank (2015). The population comprises different races which are further divided into castes. The distinction in caste and ethnicity is understood more easily with a view of customary layout of the population.

Some of the main groups include Gurungs and Magars, who mainly live in the western region. Rais, Limbus and Sunwars live in the eastern mid hills, and Sherpas, Manangpas and Lopas live near the mountains of Everest, Annapurna and Mustang respectively. Newars live in and around the capital valley of Kathmandu, and Tharus, Yadavas, Satar, Rajvanshis and Dhimals live in the Terai region. Brahmins, Chhetris and Thakuris are generally spread over all parts of the country.

Nepal has more than one hundred different ethnic groups speaking over 93 languages, with Nepali being an official language, spoken or understood by the majority of the population. English is spoken by many in government and business offices. It is the mode of education in most private schools of Kathmandu and some other cities.